The George Cross was instituted in September 1940 as a reward for acts of the greatest heroism or the most conspicuous courage in circumstances of extreme danger. This decoration was primarily intended for civilian men and women, although awards were also made to members of the Armed Forces in circumstances where a military award was not applicable.

The institution of this decoration was announced by King George VI during a broadcast to Britain and the Empire. In the course of his speech the King said:

In the order of precedence the George Cross ranks immediately after the Victoria Cross. Since its inception in 1940 it was awarded posthumously in 87 circumstances and 74 times to living recipients. There have only been two collective awards of the George Cross. The first of these was the George Cross awarded to Malta in 1942, the second being that to the Royal Ulster Constabulary in 1999.

The George Cross is awarded to Malta

The heroic defence of the island and the stoic resilience of the Maltese people gripped the attention of the world. The King wanted to do something to recognise Malta’s bravery in the face of the ordeal she was going through. Early in April 1942 the secretary of state for India, Leopold Stennett Amery, suggested that Malta should be awarded the Victoria Cross. On 15 April 1942, King George VI decided to bestow the George Cross on the island of Malta. The King’s intention was communicated to the Governor of Malta Lieutenant General Sir William Dobbie, by means of a cable from the Secretary of State for the Colonies. The King’s message read:

The Governor acknowledged the King’s message and replied saying that:

The award of the GC was announced in the Times of Malta in its issue of 17th April 1942. That same day Sir William Dobbie, in a broadcast to the nation, said that he was sure that everyone was thrilled at the high honour which the King bestowed on the Island. Dobbie referred to the unique nature of the award of the GC to the whole Maltese people saying ‘ it is a new thing which His Majesty has done ‘. This point was also emphasised by the Daily Telegraph which in its issue of the 17th April reported that the George Cross had been awarded to ‘ the scarred but defiant Island Fortress of Malta, most bombed part of the whole British Empire ‘ and that this was  ‘ the first time a decoration has been conferred by a Sovereign on a part of the British Commonwealth ‘.

Some time after the award of the GC, it was decided that Sir William Dobbie was to be relieved by Lord Gort as Governor of Malta. This opportunity was availed of to convey to Malta the George Cross and the King’s handwritten message, which were entrusted to Lord Gort.

Lord Gort arrived in Malta during an air raid on the night of 17th May 1942. Dobbie and his family left the island on the same aircraft which brought Gort. The two men had a very brief meeting before they had to part company. Dobbie, under whose leadership Malta gained the George Cross, was not to see the Medal. In his farewell speech, which was read and broadcast to the Maltese on the 8th May, Dobbie said:

Lord Gort arrived at a critical period of the Siege of Malta. The island was not only hammered by incessant air attacks but it stood under the threat of invasion. A formal presentation ceremony of the GC was postponed to a later date. In the meantime, the Governor appointed a committee to make proposals as to the form that the presentation ceremony should take.

The ceremony was fixed for Sunday 13th September 42. It took place on St. George’s Square Valletta. The square was surrounded by damaged and bomb scarred buildings; even the Governor’s Palace had been damaged. The debris littering the Square was gathered in a mound on one side.

On the appointed day a Guard of Honour furnished by the Royal Malta Artillery (RMA) marched on to Palace Square. There were also contingents representing the Army, Royal Navy and Royal Air Force. Representatives of the Malta Police, the Special Constabulary and the Air Raid Precautions (ARP) lined the square. Among those invited to assist to the ceremony were the Captains and Officers of the ships that formed part of the Operation Pedestal Convoy.

Lord Gort, accompanied by Sir Gorg Borg, the Chief Justice, took place on a raised platform erected in the centre of the square. In his speech Lord Gort said:

Gort then handed the GC, which had been placed in a glassed wooden case, to Sir Gorg Borg who accepted it on behalf of the Maltese People. He then carried the case to a plinth guarded by men from the Kings Own Malta Regiment (KOMR). The George Cross was left on the square till the evening when during a short ceremony it was carried away to safe custody. 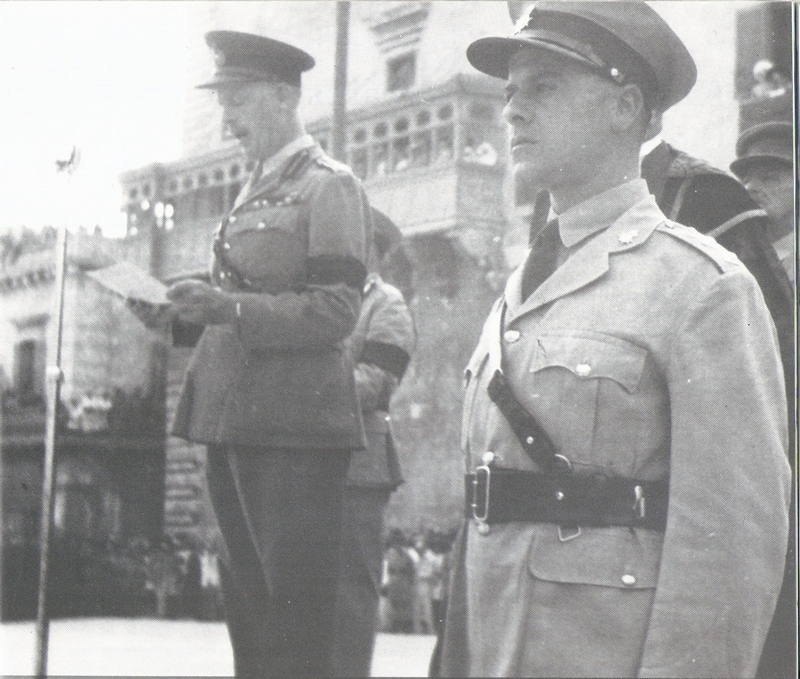 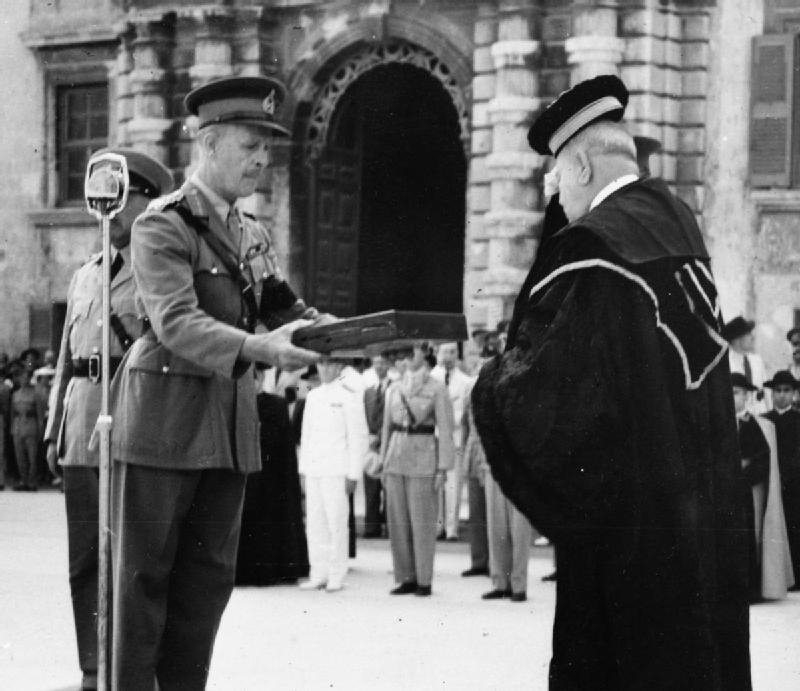 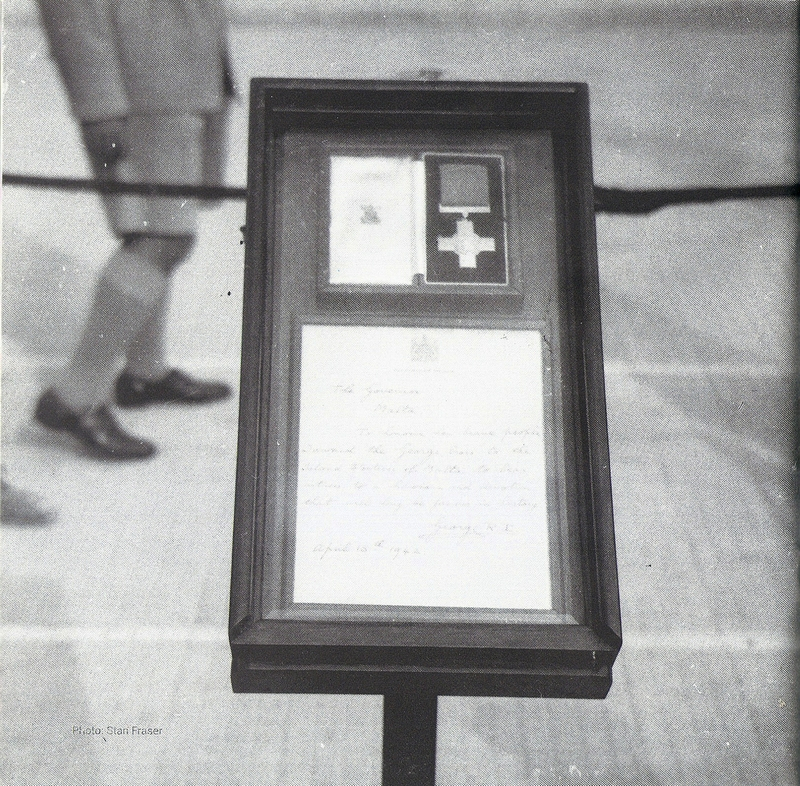 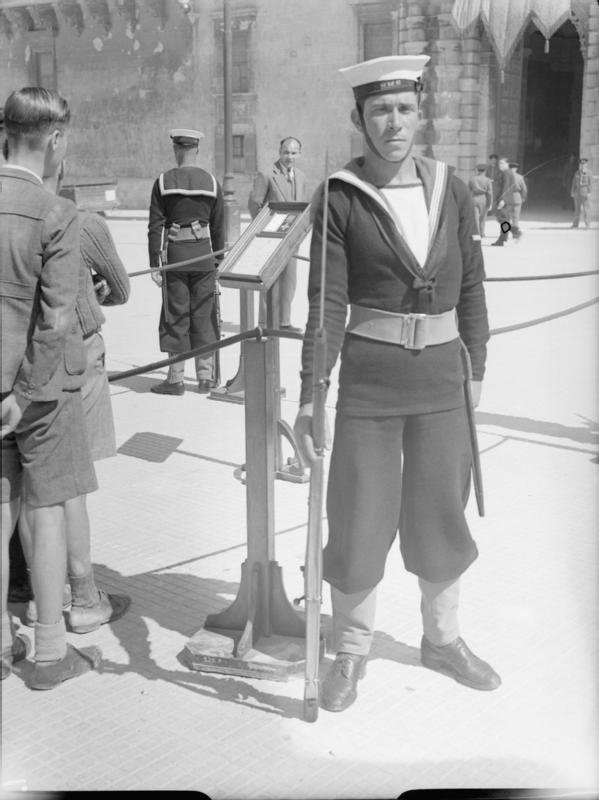 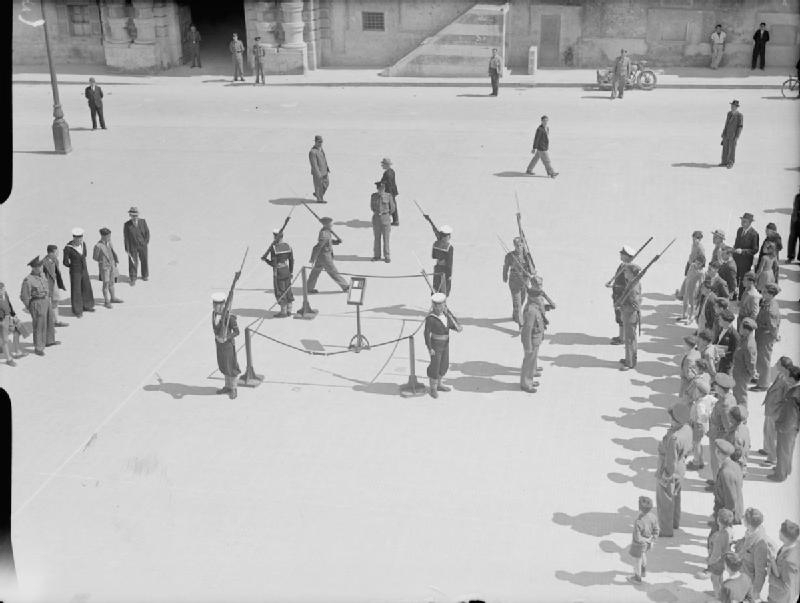 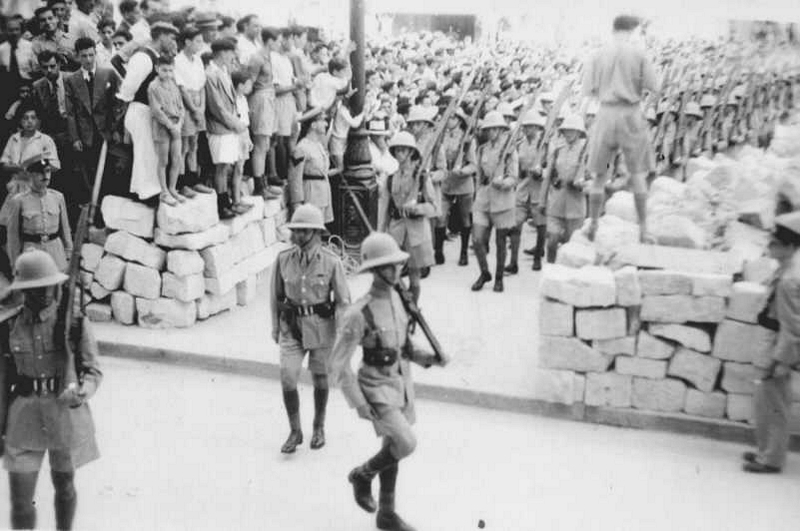 After the main ceremony in Valletta, the GC was taken to various towns and villages of Malta for the people to see. During the period 22nd September until 8th November 1942 the GC had traveled to Dingli, Cottonera, Luqa, Marsa, Mellieha, Mgarr, Mosta, Mqabba, Gzira, Paola, Qrendi, St. Paul’s Bay, Siggiewi, Sliema, Rabat, Zabbar, Zebbug, Zurrieq, Safi, Senglea, Zejtun and Gharghur. It was also exhibited at the Dockyard and in Gozo.