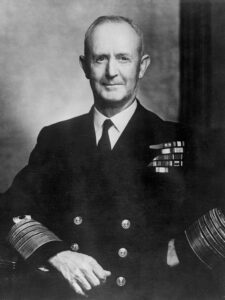 Admiral of the fleet – Lord Cunningham of Hydhope

How it all started

Combined Operations Pilotage Parties (COPP in short) were established in late 1942, and initially dispatched to the Mediterranean at the start of 1943. The primarily role and reason for establishing COPP was to perform beach reconnaissance missions to obtain geographical information from enemy beaches, prior to planning a seaborne invasion. The master mind behind COPP was Lt. Commander Nigel Clogstoun Willmott; DSO, DSC – Royal Navy; the process to establish COPP was quite a strenuous one, especially because a similar role could have been carried out by the already established SBS (Special Boat Section) at the time.

Nigel Willmott was born in Shimla, India 1910 were his father held an engineering profession. By the age of 8, Nigel was sent to England for education purposes. At the age of 17 years he joined the Royal Navy, specializing in navigation and gaining a reputation as a thinker and problem solver. His first exposure to the idea of having a military unit specializing in beach reconnaissance, emerged from his uncle’s experiences during the 1915 Gallipoli invasion (which resulted in disastrous outcome). During 1940-1942 Willmott had opportunities to put his beach reconnaissance ideas to the test, mainly because in 1941 he participated (together with Major Roger Courtney MC, KRRC – leader of the SBS) on a beach reconnaissance mission on the island of Rhodes. Although the mission was risky one, the outcome was a success and it provided the first leeway towards appreciating the benefit of having a beach reconnaissance unit in the British Military. In November 1942, Nigel was asked to perform another beach reconnaissance mission part of Operation Torch (allied invasion of North Africa); resulting in another successful outcome, Willmott was decorated and chosen to officially establish COPP. Although the formation of COPP might seem straightforward on paper, Willmott faced quite a challenge trying to convince people from the high chain of command to appreciate the importance of beach surveying and reconnaissance and create a specialized unit of the sort. Unfortunately it had to wait till end of November/beginning of December 1943 and for disastrous beach landing operations to occur, like that of the Dieppe raid (in 1942), before Nigel Willmott’s concept of COPP got the attention of the high ranking brass and most importantly Lord Louis Mountbatten.

Setting up the unit

As mentioned previously, by the time COPP was being set-up the SBS was already undergoing similar tasks of beach reconnaissance and sabotage/demolition missions, however SBS was already busy engaged in other task and therefore further reinforced the formation of COPP. Some personnel from SBS (also thanks to the help of Major R. Courtney) and previous recce. missions mentioned earlier and helped muster the initial people for COPP. Being a very top secret unit, the name Combined Operations Pilotage Parties was chosen so as not to sound simple to pronounce and remember, making the unit less apparent during the time. Initially the name designated for COPP was that of Combined Operation Beach and Pilotage Reconnaissance Party, with a cover name of Combined Operations Police Patrol, Naval and Ordinary Commandos, however this was later converted to COPP name. Besides it’s strange naming, the COPP name was chosen since it represented the Commandos training and activities (Combined Operations) amalgamated with the naval activity of beach reconnaissance and surveying performed by it’s crew (Pilotage Parties).

Willmott decided that all COPP personnel were to be based and messed in one place and separate from other general service personnel. The Head Quarters (HQ) location chosen was that of Hayling Island, a remote island east of Portsmouth and in the far Southern region of England. Hayling island was chosen by Willmott for two reasons: One because it was remote and far away from the public eye, making it more ideal for top secret training and activities to be carried out. Secondly because Hayling island was home to Sandy Point beach club, which was converted into a base of training for COPP, offering one of the best spots for beach reconnaissance training.

From start, Nigel Willmott specified that the commanding officers assigned to run COPP had to be Royal Navy Lieutenants with good experience as Navigators (having carried out the Long-N navigator’s course) and/or Hydrographers. The Commanding officers would then be supported by other officers acting as assistants and other ranks, such as Petty Officers and Seamen. Additionally, personnel from other areas of the military were required to be part of COPP, most importantly Royal Engineers and other personnel from the army. People joining COPP would either join in voluntarily or by being approached by COPP officers themselves and asked for if interested in getting involved in some risky action.

On paper, the composition of each party in COPP had to be made up of (as described by Nigel Willmott):

Besides finding the right people for COPP, another big headache for Willmott was, organizing logistics and allocating the equipment required for the functionality and training of COPP personnel. One major important piece of equipment was the ‘folbot’ (German term meaning folding canoe) canoe, an innovative and top secret water craft that was introduced into the British Military by Roger Courtney. The use of the ‘folbot’ canoe was further re-enforced into the Royal Navy thanks to Willmott’s idea of having COPP in place. At Sandy point HQ, some rooms were converted into stores for storage of equipment and other areas were selected for the storage of the canoes. From the list above one can note that specific crew members of COPP were required for canoe up-keep and also for management of storage space.

Although on paper and in writing setting-up COPP seemed to be an easy process, in reality it was quite difficult. People with the right skills and motivation had to be allocated for COPP use, creating a highly specialised unit of men with a multitude of military disciplines being put to practice for the first time in history! Also, one has to appreciate that members of COPP had to undergo rigorous training and adapt to innovative military tactics in a short time. Initial COPP’s exploits were quite disastrous and the rapid deployment of COPP parties, soon after their formation, resulted in high rate of fatalities. Find out more about the history of COPP by clicking on the pages below; get to know more about COPP’s legacy during World War 2.